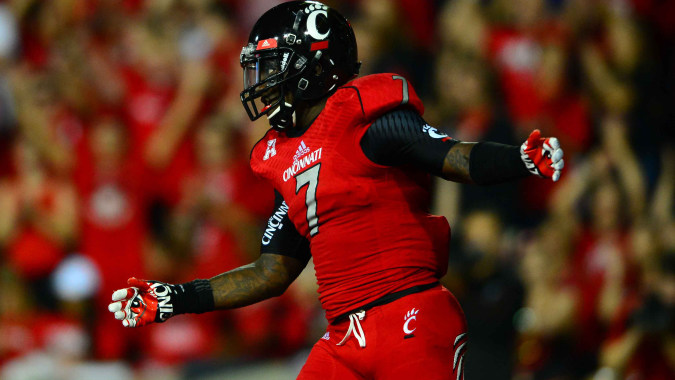 Here. Come. The 'Cats.
0
2
Well ‘Cats Fans, the season is here.  Well.  Almost here.  Yea our Cincinnati Bearcats are getting a late start to the party, but think of it this way:  How many times did you sleep through your morning class only to have an unreal Friday night anyway?  Maybe that isn’t the best analogy in the world, but there is a lot to look forward to when this team actually does take the field.  And although it will not be the usual home field we are used to, this could be the most talented team the Bearcats have EVER had.  Yes… that is in writing, feel free to bring it up in some meaningless argument down the road.

What UC will actually look like in ’14’-’15 is still very much up in the air.  The Riverboat Gambler didn’t tip his hand all that much in year one, but I imagine with the current tools at his disposal he could definitely show us a ton of reasons why he was bestowed such an awesome nickname.  The schedule is shaping up to be an exciting ride, and although it would take a totally unblemished season to get to the promised land of the College Football Playoff, there should be plenty of moments to cheer about in the upcoming season.

Let’s take a look at some of the key stories for the squad as we start a new campaign.

This has Bearcats fans everywhere frustrated.  Having the Bearcats on the metaphorical sideline while seemingly every other team in the country revs up their own respective fan bases is frustrating.  I imagine we’re all as frustrated as poor Milton in Office Space passing out every piece of cake at Lumbergh’s birthday 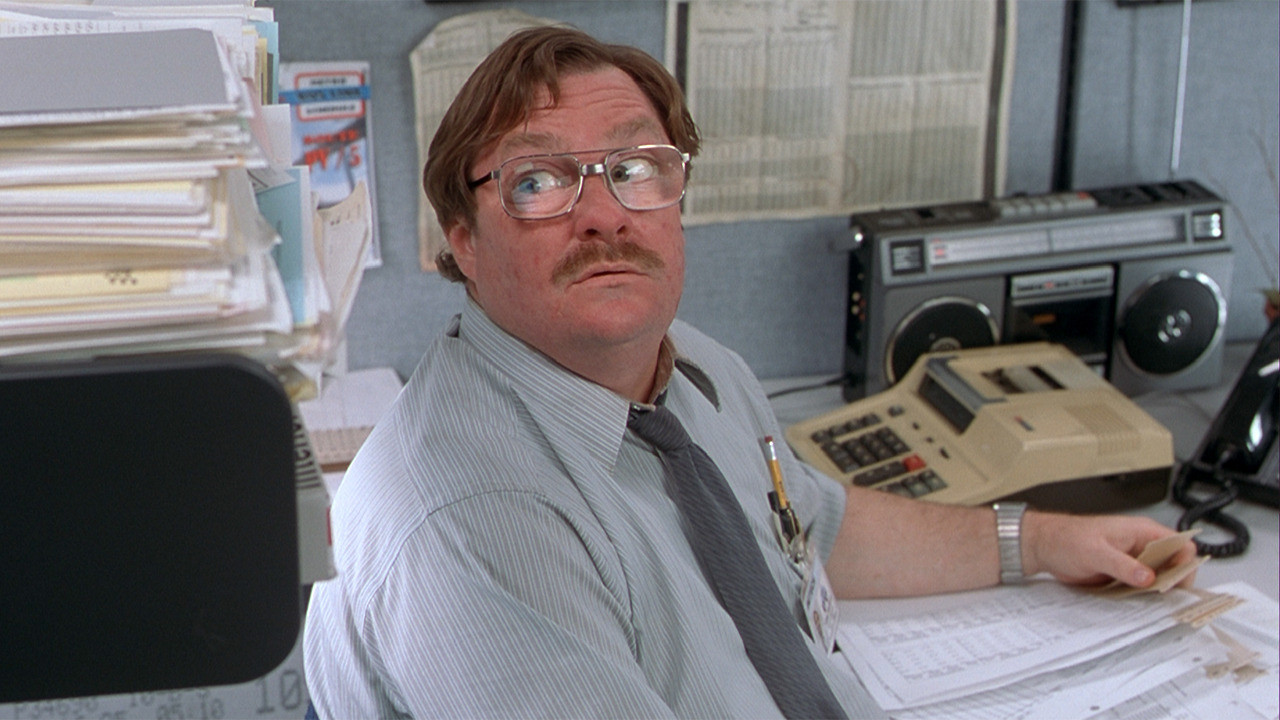 Now UC fans don't be greedy
until there is none left.  And it hurts too, because the season opener is no “cake” walk either with the Toledo Rockets coming in for the first contest having already played two games, with one against a pretty talented Missouri team this upcoming weekend.  But before you get so angry that you and Pookie burn this place down, give yourself some perspective.  UC DID have a game scheduled for the first weekend for a while… against Stony Brook.  The ‘Cats and former AD Whit Babcock swapped out the Seawolves for the chance to play a nationally recognized program: the “U”.  This situation will be better for the squad from Clifton in the long run, especially if we find a way to beat Miami at their place come October 11.  And come on, now you have an excuse to go party in the city where the heat is on.

Gunner has been named QB1, and I don’t think anyone has ever been this excited about a starting quarterback at the University of Cincinnati, let alone one that hasn’t played a single down at the college level.  Not even Tony Pike, the Reading High School Legend, saw this kind of preseason hype and all he did was take Cincy to their first and only two BCS bowl games. But I would put my level of faith in this guy just ahead of Johnny Moxon and Shane Falco.  And it’s because this guy seemingly has all the tools to be the best Bearcat QB ever to grace our beautiful campus.  I would, however, caution fans to taper their expectations just a little bit for the start of this young kid’s career. I do think that eventually he will be as good as we all hope and wish, but give the kid a few games under his belt before you start anointing him like I just did.

The Play of The Lines

Both Eric Lefeld and Silverberry Mouhon are on preseason watchlists as some of the country’s best for their respective positions: Lefeld for the Outland Trophy (Best Offensive Lineman) and Mouhon for the Rotary Lombardi Trophy (Best D. Lineman).  Quick side bar, Silverberry still has the best name in all of college sports.  I’ll see your D’arrick, God’s Gift, and Cashmere, and raise you a goddamn Silverberry.  Also, best part is his brother, a freshman linebacker on the team (and a really good one at that), is named “Kevin”.  But outside of these two studs, there will be a lot of new guys looking to stand up on both sides of the ball.  Long time defensive tackle and defensive leader Jordan Stepp has graduated, and it will be interesting to see if Junior Brandon Mitchell can step up and be the new plug in the middle for run stopping.  On the O Line, there are starters back from last year’s Belk Bowl squad (Keebler, Boyd the best among them), but they lose 3 year starter Austen Bujnoch also to the cap and gown. It was a crew that saw Brendon Kay’s jersey pretty grass stained throughout the 2013 campaign.  Here’s to hoping the guys can put together a great season as a unit and not individual performers.

Loaded at the Offensive Skill Positions

This is by far the most gifted group of athletes UC ever has had, including the groups of Gilyard and Binns.  And it all has to do with some serious depth.  The Bearcats have ridiculous speed guys in Shaq Washington and RDA IV (moving back to the slot thank heavens).

They have a pair who can stretch the field deep in Mekale McKay and Chris Moore, and great short yardage-possession-Elmered-palm guys in Max Morrison and Alex Chisum.  And Tommy T has committed to using both Hosey Williams and Tion Green almost interchangeable in the backfield, which is good to hear because Green’s power running was totally wasted last season.  The offense should be seemingly prepared for any kind of situation they find themselves in this year, and it is going to be hard for any defense to key on any one bullet when there are so many in the chamber.

On the surface, playing the entire year in the “House that the Browns Built But Never Paid For” does put a little damper on the season for all of us as fans.  Nippert is home for UC, and it offers a unique and crazy atmosphere that many other stadiumsaround the country don’t offer .  But the good news is that unlike in year’s past, this is to offer time for much needed renovations to the heart of campus (luxury suites, added capacity, expanded walkways) that will make future games at the Nip more enjoyable and allow for easier access to the beer lines.

Yea rest of country, we drink beer AT the games. Screw your vodka chugs before kickoff.
The best thing  that can happen is for the Bearcats to get off to a fast start, start getting some national pub, and the seats at PBS continue to look less and less empty.  The worst: UC has a respectable season, the stadium looks somewhat empty but not too bad, and we head back to campus in 2015 no worse off.  The most worst: Mike Brown finds a way to levy a tax against UC that has the university paying for the ability to play this year’s games there for up to 20 frickin’ years after the fact. (see construction of Paul Brown Stadium). 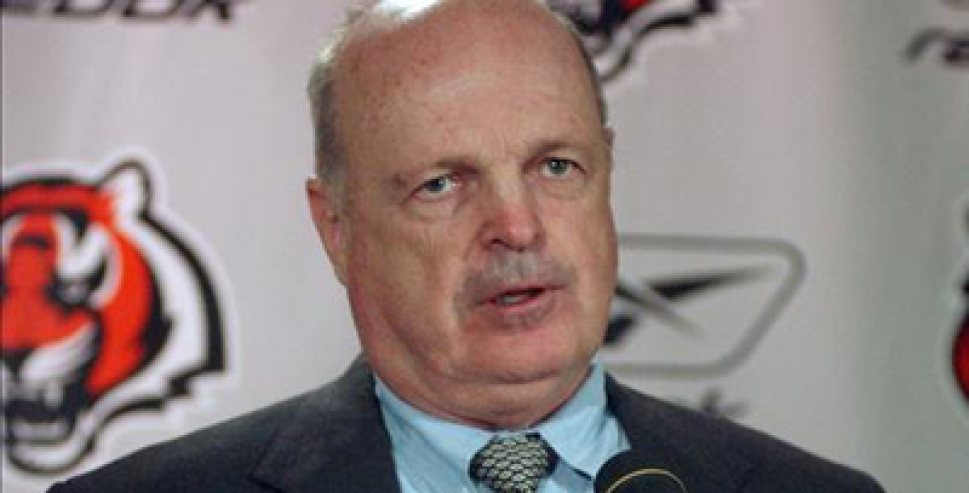 ...
Games against some Nationally Recognized Programs

I have already mentioned a quality away game against Miami (Florida, Miami Oxford hasn’t been a qualtiy road game since Big Ben was still poppin’ champagne at Top Deck), but everyone is really looking forward to the road test against the Buckeyes of Ohio State at the end of September.   All bias aside, this game and atmosphere leading up to it will be great for the state of Ohio as a whole and gives UC a chance to put or shut up after printing those “BUCkeye State” t-shirts back in 2009 (I wonder if Gilyard ever tried to sell THAT shirt for tattoos).  Win or lose, these games will be a measuring stick for how well UC can stack up against some of the better competition in the NCAA.  Also, don’t overlook a late game against the East Carolina Pirates.  ECU is a really good team with a lot of returning talent, and a team I think has a good shot to upend South Carolina in Columbia this weekend (and a subsequent Ole Ball Coach heart attack).  After watching UCF play Penn State tough over the past weekend, this is looking like a three team race for the AAC crown.

So hang in there.  We’re now only a week away from kickoff.  Snag a ticket to week one for the showdown against Toledo and cheer your rear ends off, because this team is going to deserve it.  And last time I checked, beer is still acceptable at Paul Brown Stadium.  Just be sure to only consume too much if  the Bearcats aren’t performing… or if it’s a nice day.

Grift Krehnbrink is the co-founder and chief content writer for GriftKrehnbrink.com.  Yes, Grift is so ambitious, he could find enough energy to co-found a website named in his likeness.  If you have any questions about the site, or would like to be a part of this movement, email him at krehnbrinkg@gmail.com.